Do you want to add a touch of Spain with some Spanish catering for your next event ?

The Spanish have a crown jewel of sausages – the Chorizo – and it qualified easily to join the Hut Dog™ family of premium Gourmet Hot Dogs.

Below you find 2 of our Spanish and Latin-American inspired Hut Dogs. Ideally combined with (our bar services) an ice cold Spanish beer such as Estrella, Mahou or San Miguel, a fresh Sangria, Spanish wines etc..

The “El Torro” comes with a Chorizo that`s sliced in the middle and fried crispy.

The “Chimichurri” comes with a Chorizo that`s sliced in the middle and fried crispy.

It`s served in a long soft bun (choice of white or wholemeal available) topped with a generous serving of Chimichurri and home-made lemon Aioli. 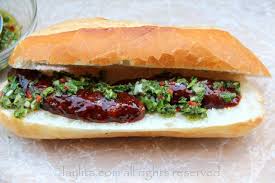 We also offer other Spanish and Latin-American inspired dishes such as Paella, Garlic Prawns, Churros and more for your Spanish catering.

Combine our awesome Hut Dogs with delicious side dishes such as freshly baked Pretzels, crispy French Fries, grilled and buttered corn on a cob and other optional extras.

Our Hut Dogs go really well with our Hut Bar – e.g. ice cold local craft beers on tap from Australia`s best brewers or imported specialty beers. We are a full-service provider and can look after your whole event including entertainment, hire equipment and more.